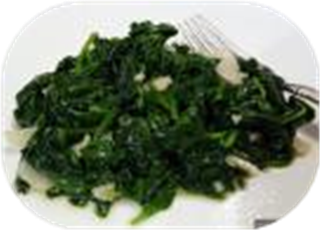 Spinach cooks down a lot. A 1 lb bag of spinach will feed about four people as a side. For this recipe, I'm only using a 5 ounce box of spinach, and 1 clove of garlic. This is enough for one person. For a family of four, use a 1 lb bag of spinach and 2-3 garlic cloves.

Fill a large bowl with water. Submerge spinach in the water and agitate to remove any dirt particles. Remove spinach from water and use a salad spinner or paper towels to remove any excess water from the spinach.

Add olive oil to a large saute pan. On medium-high heat, saute your sliced garlic for about one minute, or until the garlic is just starting to brown.

How to cook spinach: Place the spinach in the pan (if you are using more spinach than I am, you may have to pack it down) and move the spinach around so that the spinach is coated with the oil and garlic. Put a lid over the pan for one minute to steam.

Remove lid. Stir and flip spinach. If all the spinach leaves have not wilted, place the lid back on and steam for another minute. After all leaves have wilted, drain off any excess water from the pan into the sink. Drizzle some extra virgin olive oil over the spinach. Stir. Add salt to taste. Serve.

Some additional ideas that will add flavor to the spinach: Instead of using olive oil, add some southern flair by cooking the spinach in bacon grease and add bits of bacon to the cooked spinach. You can also add a small amount of butter to the pan before you put the cover on for the second time. A squirt of lemon juice would be great. If you like spice, try adding some red pepper flakes.


What else can I make with these ingredients?