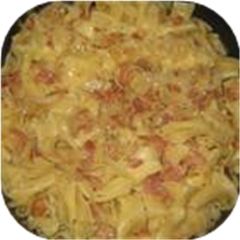 Fill a large pot with lightly salted water and bring to a rolling boil over high heat. Stir in the egg noodles; return to a boil. Cook, uncovered, stirring occasionally, until the noodles are cooked through, but still firm to the bite, about 5 minutes. Drain; return to the pot and stir in the butter.

Meanwhile, place the bacon in a large, deep skillet, and cook over medium-high heat, turning occasionally, until evenly browned, about 10 minutes. Drain the bacon slices on a paper towel-lined plate.