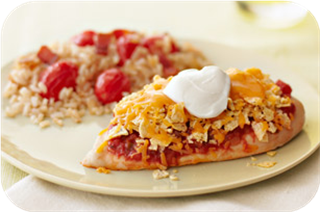 Chicken Nacho Bake Made Over

PLACE chicken on foil-covered baking sheet; top with salsa. Bake 20 min. or until chicken is done (165ºF), topping with crushed chips and cheese the last 5 min.

TACO BELL® and HOME ORIGINALS® are trademarks owned and licensed by Taco Bell Corp. Kraft Kitchens Tips Makeover - How We Did It We made over an easy meal that will save you 120 calories and 9 grams of fat, including 4 grams of saturated fat, per serving by decreasing the amount of bacon and preparing the recipe with baked tortilla chips, KRAFT 2% Milk Shredded Sharp Cheddar Cheese and BREAKSTONE'S Reduced Fat or KNUDSEN Light Sour Cream. And as a bonus, these easy-to-make changes didn't sacrifice the flavor of the original recipe! Special Extra Garnish each serving with 2 tsp. chopped cilantro. Substitute Substitute 2 cups halved cherry tomatoes for the grape tomatoes and reduce the tomato cooking time to 2 to 3 min. or until tomatoes begin to pop, stirring occasionally.