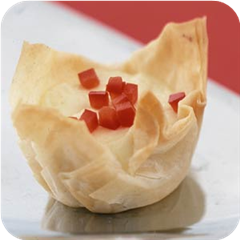 No Meat, No Pork, No Red Meat, Lunch

1. Preheat oven to 325 degree F. Place phyllo shells on a large baking sheet. For custard filling, in a medium mixing bowl combine feta cheese, cream cheese, egg, lemon juice, and flour. Beat with an electric mixer on medium speed until nearly smooth. Spoon mixture evenly into phyllo cups, using a scant 2 teaspoons of mixture for each cup. Bake for 15 to 17 minutes or until shells are lightly brown and crisp.

Homemade Mini-Phyllo Shells: Preheat oven to 350 degree F. Grease thirty-six 1-3/4-inch muffin cups; set aside. You will need a total of 4 sheets of frozen phyllo dough (18x14-inch rectangles), thawed, and about 1/4 cup melted butter. Keep phyllo dough covered with plastic wrap to prevent it from becoming dry and brittle. Lightly brush 1 sheet of phyllo dough with some of the butter. Stack 3 more phyllo sheets, brushing between each layer with melted butter. Cut phyllo stack lengthwise into six 18-inch long strips. Cut each strip crosswise into 6 rectangles. Press each rectangle into a prepared cup, pleating as needed to fit. Bake for 8 to 10 minutes or until golden. Proceed with filling and baking as in recipe for Feta Custard In Phyllo Cups. Bake shells with filling right in the muffin cups or place filled shells on a baking sheet as in recipe. (Any leftover shells may be carefully wrapped and frozen for later use.)