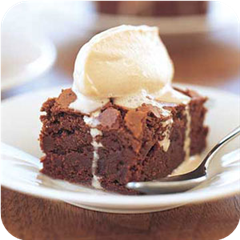 No Meat, No Pork, No Red Meat, Dessert, Low Sodium

2. In a large microwave-safe mixing bowl combine chocolate, butter, and water. Microwave, uncovered, on 100 percent power (high) for 2 to 3 minutes or until butter is melted, stirring once or twice. Remove bowl from microwave oven. Stir until chocolate is completely melted. (Or, combine chocolate, butter, and water in a medium saucepan; cook and stir over low heat until chocolate is melted.) Transfer to mixing bowl.

4. Bake about 25 minutes or until a toothpick inserted near center comes out clean. Allow to cool on a wire rack about 30 minutes (or until brownies hold a cut edge). Cut into bars.

5. To assemble, while brownie is still warm, place one bar on each plate. Top with a scoop of the Frozen Coffee Whipped Cream. Makes 20 to 25 brownies.

Frozen Coffee Whipped Cream: Chill a medium mixing bowl and the beaters of an electric mixer. In the chilled bowl, beat 2/3 cup whipping cream, 4 teaspoons sugar, and 4 teaspoons cooled brewed espresso or 1/2 teaspoon vanilla with the chilled beaters on medium speed until soft peaks form. Cover and freeze 2 to 3 hours or until firm.