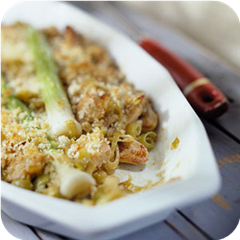 1. Trim and discard root ends from the 8 to 10 leeks; remove several inches from the tops and any tough outer leaves. Halve leeks lengthwise. Clean trimmed leeks thoroughly under cold running water to remove any sand. Bias-slice leeks into 1/4-inch-thick slices. (You should have 3 cups sliced leeks.)

2. In a large skillet, heat oil over medium heat. Add sliced leeks. Cook and stir for 2 to 3 minutes or just until tender. Remove leeks from skillet; set aside.

3. In the same skillet, cook and stir chicken strips for 3 to 5 minutes or until no longer pink. Remove skillet from heat. Add wine. Return skillet to heat. Bring mixture just to boiling; reduce heat. Cook, uncovered, for 4 to 5 minutes or until most of the liquid has evaporated, stirring occasionally. Add whipping cream, salt, and nutmeg. Return to boiling. Cook and stir about 3 minutes more or until slightly thickened. Add sliced leeks to chicken mixture. Pour into a lightly greased 1-quart au gratin dish or casserole. Cover and refrigerate for at least 4 hours or up to 24 hours.

4. Preheat oven to 400F. Uncover casserole. If desired, add baby leek halves. Sprinkle cheese and bread crumbs over. Bake, uncovered, for 20 to 25 minutes or until topping is golden and leek mixture is heated through. Makes 6 servings.

5. To tote to a potluck: Cover casserole tightly with foil. Place in an insulated carrier.