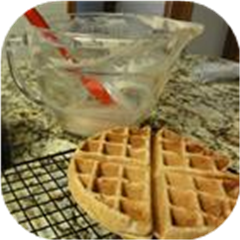 "If you like those cinnamon waffles from the frozen food department of the grocery store, you'll love these! I developed this recipe because I don't care for syrup. Most waffles need the sweetness of syrup to make them special. These waffles are yummy just as they are; no syrup necessary! Whipped cream and fruit are a great addition if you want to go all out or just add butter and powder sugar to the top. These may brown quicker than standard waffles because of the sugar in them, so test the first one and

No Meat, No Pork, No Red Meat, Dessert